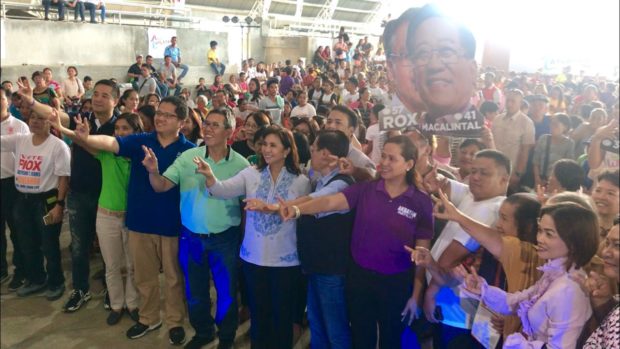 MANILA, Philippines — Amid the “sexist, violent” climate President Rodrigo Duterte has fomented against women and youth, the mothers, sisters and wives of the opposition Otso Diretso coalition have joined calls to elect “dignified, just” leaders who can work toward greater equality.

On Friday, the mothers of Erin Tañada, Bam Aquino, Florin Hilbay and Samira Gutoc, and  Chel Diokno’s sister and Romulo Macalintal’s wife stepped forward from the campaign trail’s behind-the-scenes for the first time.

“We need to choose candidates who will stand as allies to both women and children,” said Melanie Aquino, Bam’s mother. “Allies who will uphold already existing laws that protect them but also fight for their dignity and welfare.”

Their stories of the candidates’ childhoods culminated a monthslong, oft-combative campaign period.

What’s clearer, however, is how these women’s lives shape the candidates’ world views and values.

Mothers Melanie and Azucena Tañada, and sister Mench Diokno guided young Bam, Erin and Chel through the turbulent martial law period, awakening in them a social consciousness that placed them on this path 43 years later.

For Erin, the incarceration of his grandfather Lorenzo Tañada Sr. led him to become an activist at such a young age, Azucena said.

“As a mother, I worried, but I was also proud that at such a young age, he showed such great love for his country,” she said.

The same happened with Chel, whose turning point was “when our dad (Sen. Lorenzo Diokno) was brought to Fort Laur,” said Mench.

“We saw the valor of our mother in going to the Supreme Court to demand to know why he was brought there… That was how he lived. And that is why he is like this,” she said.

“There is a huge gap between the story of my son (Florin), who grew up sa laylayan (at the fringes of society), and their stories,” Lydia said. “It’s why I sacrificed so much so he could achieve his dreams, even if until now I still can’t grasp what’s happening with our lives.”

Their stories made it clear that their sons’ values stood in contrast with the President’s.

“He [the President] always has something bad to say against women,” Azucena said. “It’s setting a bad example for our youth that they watch the President treat women so terribly, to see how low he thinks of them.”