The era of 'Visiting Forces Disagreements'

The sudden termination of the Visiting Forces Agreement on Feb. 11, 2020 comes exactly 121 years to the day, when the Philippine-American War was beginning to come to a boil. Bloody battles broke out in the second month of the year from Cavite to Caloocan and from thence Manila to even faraway Iloilo. It was just the start of the conflict that would run for the better part of the decade into the 1900s.

An enormous trove of the war’s memorabilia is on offer at the upcoming León Gallery auction, amassed by a single collector over 20 years across two continents. It is comprised of more than 200 original photographs, many never seen before; maps of important battles; a copy of the original Malolos Constitution; war reportage in American newspapers and French illustrated magazines; important color postcards, all in museum-quality condition.  (Part of the collection was, in fact, exhibited in 2015 at the Yuchengco Museum in a show titled “The First Philippine Republic and the United States: 1898 to 1907.”)  Among the rarities are a half-dozen revolutionary bank notes signed by Pedro Paterno, one of the Philippines’ wealthiest men and Aguinaldo’s closest adviser. It’s with a certain sense of irony that part of the proceeds of the auction will go to raising funds for Filipino artists to study in the United States as part of the mandate of the Asian Cultural Council which was once known as the all-mighty Rockefeller Foundation.

There are other symbols of our disagreements with the Americans, including a history-laden flag from Sulu which had a particularly blood-soaked chapter in the Philippine-American War. President Duterte likes to remind us all of the Bud Dajo massacre but there were many other battles across Mindanao. This flag, in particular, is known in technical terms by enthusiasts as a “Moro Insurrection Flag” — one hopes without making much about the political incorrectness of these words. It is interesting on two counts: First, that it knowingly mimics the US stars and stripes, substituting the 50 states for the five provinces of the Sulu kingdom while co-opting the red, white and blue. It also has a crossed wavy kris (kalis tulid) and a spear (budjak). These weapons were cunningly wrought to make slow-to-heal wounds. (The flag, incidentally, is accompanied by a set of rare, 19th-century blades in a single lot.) The other noteworthy thing about the flag is that its original owner served at a battle that ended with the demise of the swashbuckling pirate Jikiri who was the terror of the Sulu Archipelago, paralyzing the American forces for two straight years.

The selection would not be complete without a Felix Resurreccion Hidalgo — who, alongside Fabian de la Rosa, was a recipient of lavish American patronage to symbolize the passing of the Spanish age which had revered Juan Luna. De la Rosa, in fact, would be clapped into jail by the American “visiting forces” at the start of the war. He would be let out only on the say-so of the US Consul who in happier times had asked him to paint his portrait. 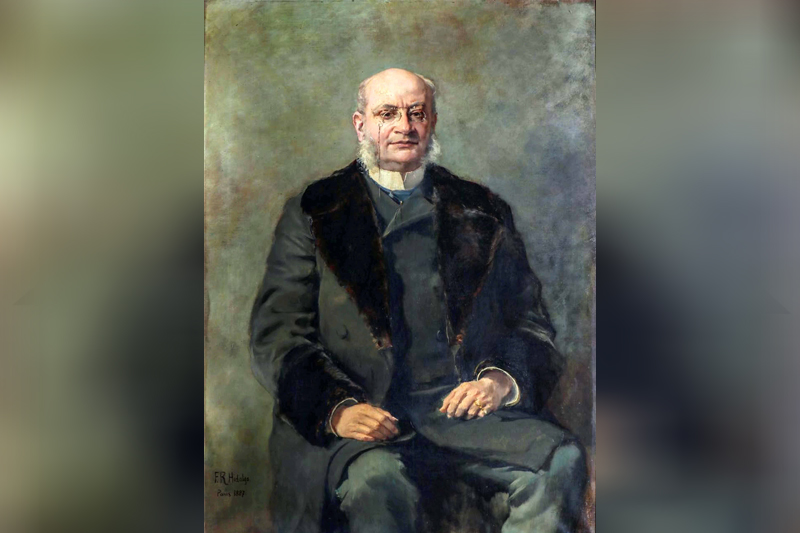 A portrait of a Parisian Grandee by Felix Resurreccion Hidalgo

Telesforo Chuidian, the model for Rizal’s Kapitan Tiago and also one of the Chinoy zillionaires who financed the Philippine-American War, was not so lucky. He was incarcerated in Fort Santiago in such horrible conditions that he would be up to his neck in fetid water as the tide rose. (One can take a midnight tour these days of the actual dungeon in Fort Santiago.) His descendants say that his freedom was bought with a bayong (or tall basket) brimming with diamonds. Upon his release, he promptly — and sensibly — decamped to Paris. In his wake remains a stunning aparador (wardrobe), as stately and as imposing as he must have been in his heyday, also astonishingly available at the February auction.

American-educated painters, including Arturo Luz and Fernando Zobel, are included. Zobel, in particular, depicts a mesmerizing interpretation of the Jucar, the Grand Canyon of Spain.

Finally, two maps show us the fates of past visiting forces. The first is a magnificent two-part chart of the British invasion of Manila, by William Nichelson, dated 1764. The other is a gorgeous map of Rizal’s Manila, dated 1894, which outlines the Spanish calles and plazas of our capital city. Its delicate colors remain vibrant by virtue of having been stored folded, away from the effects of sunlight. Over the next decade, however, those names would devolve into snappier American street names, named for instance after the US volunteer regiments (in Malate) or World War I battles (in San Juan.)

It’s a reminder that one set of “Visiting Forces” would be replaced by another  — until we finally learn our lesson and not allow any more invasions.