The drug war is the monster in `Aswang'

Aswang is a horror movie in the sense that it draws us, wide-eyed, through a landscape of horrors, led either by a roving activist pastor or a young, tresilient Virgil by the name of Jomari, who shares with us the day-to-day existence of garbage-picking, nightly murders and visits to his mother in prison.

It’s a testament to how vast a problem the drug war is in the Philippines (and elsewhere) that no one metaphor or perspective encompasses it all. We’ve seen Brilliante Mendoza’s Ma’ Rosa, series like Amo, flashes of it coming to life in the Marcos documentary The Kingmaker. Some are pro-drug war, some anti-; Aswang is the most searing, haunting vision of hell I’ve seen yet.

What we see, as female director Alyx Ayn Arumpac’s cameras track the night skies of Manila, is a cycle of poverty, predation and cops-and-robbers mentality that leaves the poor with nothing to hope for, nothing to cling to, nothing to aspire to, beyond daily survival.

And drugs, of course. A lot of them are drug users or low-level dealers. Only brief flashes — TV announcements in the background, the pastor’s message to media gathered in his chapel — remind us of the larger context: the poor will be targeted, the big fish are free to go.

On the ground at night, camera lights catch glimpses of uniformed police, blood flowing down a drain, bullet-filled bodies, in the streets, in alleyways, in morgues, in coffins. The shell-shocked poor are haunted, as the metaphorical voiceover tells us, not by literal aswang, or a shape-shifting monster, but by fear itself. Who will be snatched next? Who will be shot dead next? 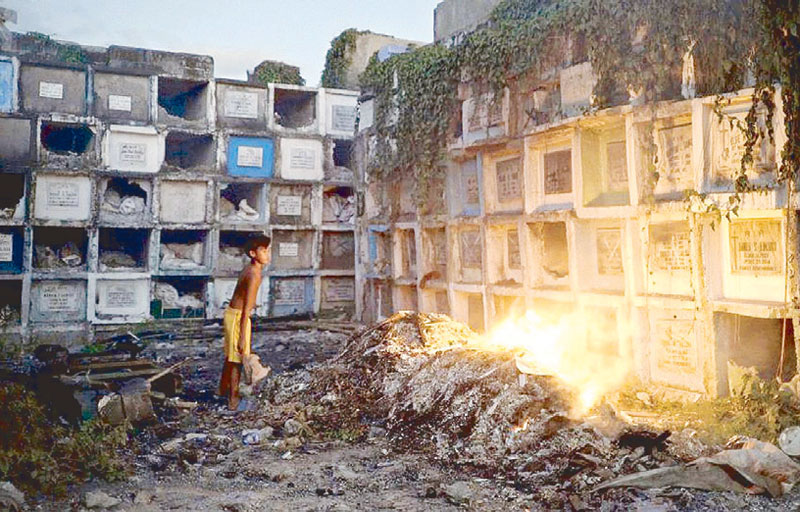 We hear from voiceover that even police assets have short life spans. Once they “know too much,” “see too much,” they’re expendable. It’s implied that the police do the expending. Seeing things too clearly out here is fatal.

This is an eyes-wide-open look at how the Duterte drug war has gone wrong, and though it was shot during the early stages, we see how avenues of corruption were baked into the process — dozens of  “suspects” are rounded up and kept behind a steel panel concealed by a bookshelf in one police precinct. The confined tell the cameras they’re being shaken down for ransom money, but when the Commission on Human Rights comes to document their confinement, the police hastily prepare arrest documents and shuttle them off to an actual prison until they can face charges.

There’s a brief interlude with a coroner, someone who’s seen the number of dead shoot up from three to five per week to 30 or more. A bullet-riddled body lies on a slab behind him as he sweeps up the morgue. It leaves lingering feelings in these people — fears and questions, like “What happened to so and so? Haven’t seen him around for a while.” But if he’s not on the slab, the coroner shrugs and assumes so-and-so is still alive.

On the playground level, where kids like Jomari hang out by a creek, trading tales of river monsters when the creek rises, it’s early training in the cops-and-robber game with makeshift guns and sticks: most want to be the one blasting the prone victim on the ground with bullets.

Having seen our own glimpses of the poverty and hopelessness in Metro Manila all these years, Arumpac takes the viewer closer. And closer. Both Jomari’s parents are in prison. Midway through the movie, Jomari himself has disappeared. Local folk haven’t seen him in days, weeks. We fear the worst.

Other locales include the cemented-in crypts that often appear alongside squatter shacks, usually near a creek. The dead are simply shoved in lengthwise, as though being inserted with a pizza spatula, then covered up with cement blocks and a written epitaph. The tributes seem sad, perfunctory, but the expressions of loss — by family members, kids, mothers wailing over their dead sons — are plenty real.

Streamed last July 11 and 12 on Vimeo, the makers of Aswang ask people to make donations to EJK victims by visiting www.aswangmovie.com/action. They promise more online screenings in future.

Room without a window

Educators on managing their mental health at #StartANewDay forum

Wild elephants, monkeys in Thailand to be controlled with $14 million budget

How safe are cafes and restaurants?