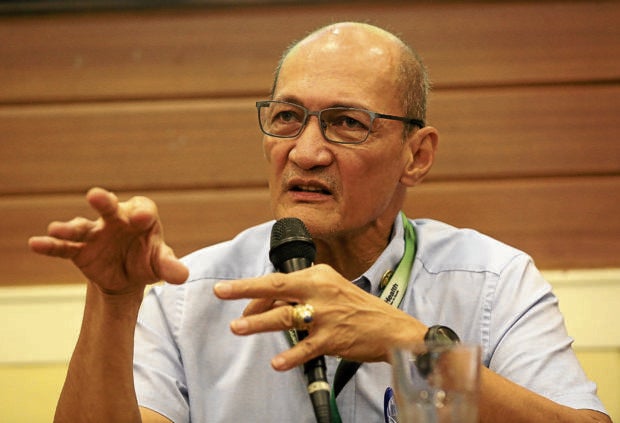 MANILA, Philippines — Senators on Tuesday admonished Ricardo Morales, president and CEO of the Philippine Health Insurance Corp. (PhilHealth), for not immediately sounding the alarm over what they believed were “serious, unbelievable overpricing” in the agency’s procurement and his supposed failure to rid it of corruption.

PhilHealth’s proposed procurement of 15 units of CISCO catalyst switches for P4.81 million — at P320,000 each — when the market price was just at P939,360 — or at P62,424 per unit — should have raised the “red flag” for Morales, senators said as they investigated fresh claims of the corruption in the agency.

“Shouldn’t you have raised the red-flagged that right away?” Senate President Vicente Sotto III asked Morales in Filipino.

In response, Morales admitted that his then-executive assistant Etrobal Laborte had informed him about the “discrepancy” in the pricing of the items. However, the PhilHealth chief said he wanted a “definite” answer as to which amount was the correct one.

“I’m not an IT expert. So I don’t know what this IT means and these prices,” Morales said.

Still, lawmakers pressed Morales as to why he did not flag the proposed procurement when Laborte had already informed him of a possible discrepancy.

But Morales argued that assumed that all of the content of the documents he signed had been carefully scrutinized by his subordinates before it went to him for approval.

“The documents I signed go to several processes. They go to several [officials] who are supposed to do their due diligence before it reaches me for approval,” Morales said.

“So I assumed, sir, in this case, that the figures presented to me were the right and correct figures for the items we purchased,” he said. “I assumed that there was no problem with the final price, that it was the correct amount.”

Sen. Pia Cayetano, meanwhile, asked Morales if he was “bothered” by the alleged overpricing unearthed during the hearing.

“Because on its face, all of us, whatever our background is, cannot help but come to the conclusion that there is serious, unbelievable overpricing,” she said.

“It bothers me that the price is not accurate,” Morales said. “We could be paying more than what we should be paying for,” he said.

At this point, Cayetano reminded Morales that President Rodrigo Duterte had appointed him at the helm of the agency to “unearth corrupt practices” — such as paying for claims made by already dead beneficiaries and buying overpriced items.

“On its face, given that the institution you entered, you were told to be careful because there were many scams there, look for them — did you not have any sense that it looks suspicious?” she asked Morales.

At the beginning of the hearing Sen. Panfilo Lacson, who filed the resolution with Sotto that initiated the Senate investigation, called PhilHealth a “murky, stinking swamp” that would need to be drained.

He said that a “deeply rooted, mafia-like syndicate” was in control of the resources of the corporation and “habitually , that even the COA seems helpless in the conduct of their regular audit.”

Sen. Grace Poe also questioned the “spineless and lax leadership” in PhilHealth that failed to stop the alleged corruption.

“We are already aware of the overpriced procurement. General Morales was put there, clearly, to clean up PhilHealth so that there won’t be corruption — or lessen it,” Poe said.

“But when asked about it, he can’t even answer off the top of his head what his plan was to stop corruption,” she added.

For his part, Sen. Joel Villanueva said he was disappointed with the failure of some PhilHealth officials to offer substantial answers to questions raised during the investigation.

Villanueva said the evasiveness of PhilHealth officials to answer simple questions was worrisome.

Two of those questions were on the average hospital bill of COVID-19 patients and the rationale for the insistence of certain board members to endorse a multi-million IT program budget despite a pending audit or inventory of the agency’s ICT equipment.

The Commission on Audit (COA) earlier flagged the IT project to be rife with irregularities.

COA and PhilHealth’s resident auditors saw as “” the of various equipment worth P734 million, which was not contained in the original budget proposal submitted by the state health insurer.

A group of COA auditors, in their report in May, found the budget for five “ICT (information and communications technology) resources” — computers, scanners and other items — was overpriced by P98 million.

Earlier in the hearing, Morales told senators that he reviewed reports of alleged corruption within the agency as soon as he was appointed in July last year.

“I review the cases that are being filed. I look at the cases and I follow them up. Some of the cases have been going on for many years and I investigated reports of discrepancies inside the organization,” Morales said.

However, he admitted that he had yet to fire an official because of corruption.

Video games As a tool to prevent COVID-19

Biden to focus on health care in Supreme Court debate