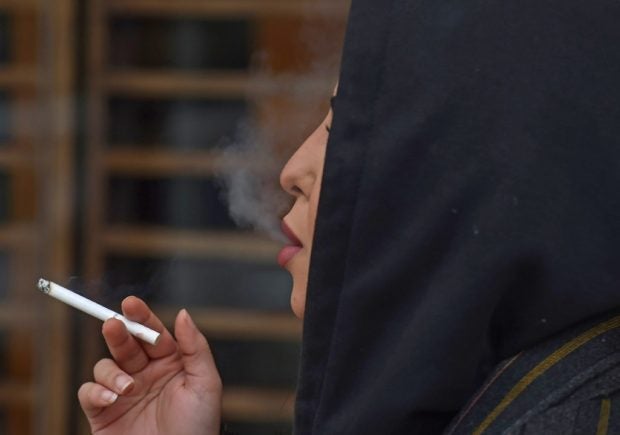 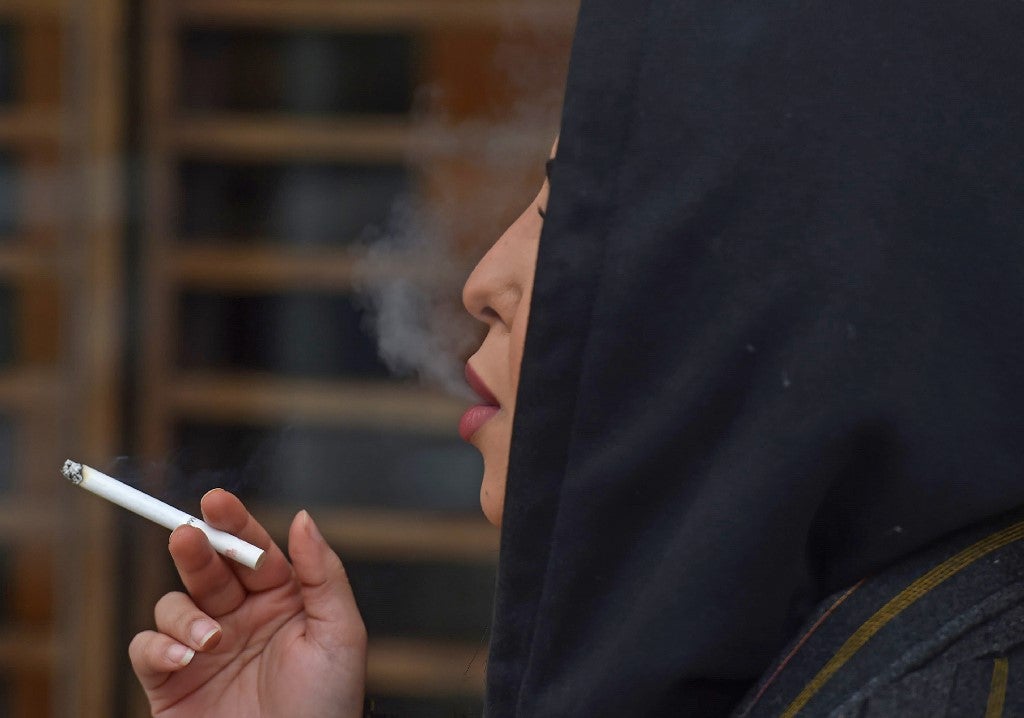 Najla, a 26-year-old Saudi woman, smokes publicly at a coffee shop in downtown Riyadh on February 5, 2020. – The sight of women lighting up in public has become much more common in recent months, an unthinkable prospect before the introduction of sweeping reforms in the ultra-conservative kingdom. (Photo by FAYEZ NURELDINE / AFP)

RIYADH, Saudi Arabia — Rima settles in a chair at an upscale Riyadh cafe, looks around carefully, and seeing no one she recognises, drags on her electronic cigarette and exhales a cloud of smoke.

“I feel that smoking in public is a part of exercising my newly won freedoms. I am happy that now that I can choose,” the 27-year-old Saudi who works for a private company in the capital told AFP.

Like Western feminists of the early 20th century, in an era of social change in Saudi Arabia some women are embracing cigarettes, shisha pipes or vaping as a symbol of emancipation.

The sight of women smoking in public has become much more common in recent months, an unthinkable prospect before the introduction of sweeping reforms in the ultra-conservative kingdom.

Women are now allowed to drive, attend public sporting events and concerts, and obtain passports without the approval of a male guardian.

Rima, who started smoking two years ago, dismisses concerns about the harmful effects of tobacco, but is worried her family will find out.

She says she is prepared for a showdown.

“I won’t tell them that this is about my personality liberty, because they won’t understand that women are free to smoke like men,” said Rima, dressed in a traditional black abaya with gold embroidery matching the hijab that covered her hair.

Najla, 26, who like Rima asked to use a pseudonym, said that despite the rapid social changes, double standards still existed, and that it was still considered a “scandal and disgrace” if women smoked.

The only woman lighting up amid several tables of male smokers, she said she intended to “challenge society” and ignore the occasional dirty looks.

“My rights will be fully respected when my family accepts me as a smoker,” she said, recalling that a friend was sent to an addiction clinic when her parents found out about her smoking.

Najla started smoking while still a school student, and like her, up to 65 percent of female Saudi high schoolers light up secretly, according to a 2015 study by the medical faculty at King Abdulaziz University cited by Arab News.

Despite the limitations, in a country where until just a few years ago religious police would chase and hit women for infractions like wearing nail polish or allowing a strand of hair to escape from their hijab, the changes have been head-spinning.

“Most of our women clients order shisha. It’s something that was totally unimaginable just three months ago,” a Lebanese waiter told AFP at an upscale cafe in north Riyadh.

Heba, a 36-year-old longtime smoker who sat at a table nearby, described growing up in a closed country where “everything was forbidden to women”.

“I never imagined I would be able to smoke shisha in public next to men,” she told AFP.

“Now, everything is allowed. Women venture out without hijab, without abaya and they even smoke publicly.”

But even as the kingdom has introduced reforms, it has attracted condemnation for a heavy-handed crackdown on dissidents including intellectuals, clerics and female activists.

In 2018, authorities arrested at least a dozen women activists just before the historic lifting of the decades-long ban on female motorists.

Many of the detained have accused interrogators of sexual harassment and torture. Saudi authorities reject the accusations.

“There is no doubt that at the persona level there is more freedom,” said Walid al-Hathloul, whose sister Loujain is on trial over allegations of having contacts with foreign media and diplomats.

“But the reforms in favour of women are part of a public relations campaign to improve the kingdom’s human rights record,” he told AFP.

“The arrest and demonisation of women activists is proof of this — it’s designed so that the reforms will not be credited to the activists,” he told AFP.

PNP gears up for imminent extension of Luzon-wide quarantine

PH carriers add wings to PPE deliveries, to get 170,000 sets from China

Premier League in spotlight as debate swirls around virus action

Financial aid to LGUs to be released soon by DBM