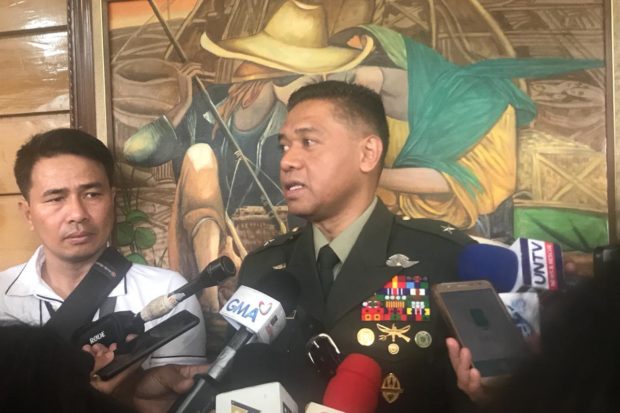 Brig. Gen. Romeo Brawner Jr., newly-appointed PMA Commandant of Cadets told reporters that this would be one of his pilot projects at the country’s premier military school stressing on the need to care for the mental health of future military officers.

“We will come up with programs that will address, let’s say, trauma na mararanasan ng mga (that might be experienced by) first year cadets. So before they become upperclassmen, they have to go through some sort of guidance counselling para ‘yung mga nagkaroon ng trauma hindi nila dadalhin ito kapag naging upperclass sila (so that those who had trauma will not have to carry it with them when they become upperclassmen),” he said in an interview on the sidelines of a testimonial parade on Saturday (Sept. 28) by the cadets for Police Gen. Oscar Albayalde, Director General of the Philippine National Police.

“Hindi naman natin sinasabi na nasisira ang ulo ng mga kadete (We are not saying that cadets get crazy) once they go through training, but of course being human beings, kailangan natin i-address ‘yun (we have to address that),” said Brawner.

He added that mental health programs will also be implemented for upperclassmen at the PMA. Additional personnel will also be assigned to the guidance counselling office.

Brawner explained that if untreated, mental health problems among cadets, who undergo strict militarytraining at the PMA, may lead to “violent tendencies and behavior.”

Meanwhile, Brawner said the PMA will also be restoring the supervisory powers once held by the most senior cadets or 1st Class cadets over the three younger classes to prevent them from joining or being victimized by hazing.

Brawner, a member of PMA “Makatao” Class of 1989, said it would improve the honor system governing the behavior of the Corps of Cadets.

All cadets swear to abide by the Honor Code, a body of guidelines highlighted by their promise never to cheat, lie or steal nor condone cadets who violate any of these rules.

“The Honor Code is perfect,” said Brawner, but has occasionally been violated because of how it has been enforced or interpreted.

He said granting 1st Class cadets authority once more would discourage cadets from maltreating plebes or cadets serving their first year at PMA. Six cadets, four of them 3rd Class cadets (or cadets in their second year of military school) have been classified by the Baguio police as suspects in Dormitorio’s death.

The plebe died in the hospital at dawn hours after he was discharged after complaining of a stomach ache. The police autopsy discovered Dormitorio had internal injuries attributed to blunt force trauma.

The PMA has detained these cadets, and has initiated the expulsion of three prime suspects, among them a 1st Class cadet.

Brawner said they would be turned over to police custody once a local court orders their arrest. The police is waiting for Dormitorio’s family to arrive in Baguio before they file hazing charges against the suspects, said Police Col. Allen Rae Co, Baguio City police director.

The PMA has taken steps to improve its health protocols, and would now require a comprehensive check once any cadets request for medical treatment, Brawner said.

The academy also has a system that provides trauma and stress counseling and treatment for lower class cadets, who may not be able to cope psychologically with the strain of military training, he said, citing the possibility that resentment may inspires violent tendencies.

The academy was also directed by Defense Secretary Delfin Lorenzana To make sure each cadet gets his fair share of meals and sufficient time to sleep, in light of allegations some plebes have been punished by depriving them of food and rest.

But the most important reform would be empowering the senior cadets, he said.

“‘Yung fourth years are the big brothers of the first years kasi. Dapat sa kanila pwede magsumbong ‘yung mga first year cadets. Ibabalik natin ‘yung ganoong sistema (They should be the ones to whom first year cadets can relay their concerns. We will bring back that system),” Brawner said.

The task of regulating cadet activities was transferred to PMA tactical officers following a stakeholders summit and a series of reforms intended to end hazing and convert the military school into a leadership training institute which were initiated between 2002 and 2004 by that period’s PMA superintendent, retired Gen. Edilberto Adan.

“If you give them the task, (PMA officials would be) able to monitor the progress and health of each cadet,” he told newsmen here.

“For instance, we had a first class policy board which reports cadets who commit infra things and which gave out punishments. I was the policy board chair (in 1989). I committed an offense that no one knew but I had to report myself and give myself punishment to show cadets that the first class system works. The system is one way of instilling discipline,” Brawner said.