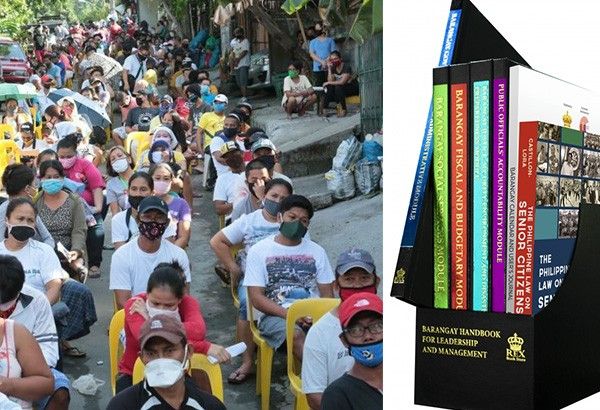 MANILA, Philippines (As released) — The novel coronavirus disease 2019 (COVID-19) pandemic placed barangay officers on the spotlight as they served as frontliners in their respective communities.

Residents of every barangay counted on their barangay officials for guidance and action on their safety and other support services.

They were the ones to implement the nationwide curfew, screen and qualify those eligible for the quarantine pass, maintain peace and order within their communities, and hand out the relief goods that come in through the Department of Social Welfare and Development (DSWD) or the local governments.

They are also the first to check if an individual or a family manifests the symptoms of the virus. They are the ones who immediately call the representatives of the Department of Health (DOH) should hospitalization of the symptomatic people is needed.

As we are now in General Community Quarantine (GCQ) mode, now more than ever, the role of leaders at the barangay level has risen to importance. To aid them to fulfill their roles is the very first and most comprehensive manual for barangay officials titled "Barangay Handbook for Leadership and Management." The guide is a five-volume book set designed to aid barangay officials as they perform their duties, and arm them with the proper wisdom and skill to implement laws and issuances, both national and local.

The barangay may be the most basic level of governance, but it is also the most important as it is closest to its community and constituents. Barangay officials are also the first to respond to cases and issues in the home and the community.

This is why the "Barangay Handbook on Leadership and Management" was created in partnership with the Center for Local Governance and Professional Development (CLGPD) to address the lack of courses and publications that deal with administering public service on the barangay level.

Rex, led by its Chief Executive Officer Don Timothy Buhain, published this handbook to improve governance at the lowest level to provide a good foundation for all local government units.

“Many of our barangay officials, including the Punong Barangay, land on their feet running as soon as they get the job, which is when they are elected,” Buhain shared.

“They are dedicated to their people and genuinely want to perform their duties to the best of their abilities, but they learn things as they go along their work. Not many have mentors who can help or prepare them. There is very little documentation to guide them along the way. When they do need to brush up on the laws that they have to implement, they still have to scramble for resources. Our Barangay handbook will give them everything they need to know and hopefully excel in their post.”

There are at least 75 reference materials and books related to barangay governance and while many of these are vital to the overall competence of a barangay official, there is no one source for these materials. The Barangay Handbook has eliminated that problem and compiled everything—from laws and implementing rules and regulations (IRRs) to program activity references and legal opinion.

The set of handbooks covers the entirety of local governance through different modules: barangay governance and administration; barangay fiscal processes and budgets; social services; justice and judicial procedures; security, environment, and disaster preparedness; accountability of public officials to their constituents; and the TRAIN (Tax Reform for Acceleration and Inclusion Act) Law and its relevance to taxpayers.

It also includes a barangay calendar and journal that barangay officials can use as a guide to monitor and implement their daily activities.

Education does not stop at any point in our lives. In fact, government officials who have been elected to act for and on behalf of its constituents are even more so required to practice continuous learning and development.

The development of the barangay and its leaders is even highlighted in Section 394 of Republic Act 7160, also known as the Local Government Code of 1991. The code says that the “barangay, as the basic political unit of government, serves as the primary planning and implementing unit of government policies, plans, programs, projects, and activities in the community, and as a forum wherein the collective views of the people may be crystallized and considered, and where disputes may be amicably settled.”

The handbook hopes to help establish the authority and empower the barangay by giving the officials the right resources to create a better community. In the local government level, continued education will help create public servants who are fully equipped to handle their responsibilities and even respond to different arising needs of their barangays.

For 70 years, Rex claims to have pioneered and paved the way for the publication of high-quality and relevant textbooks, academic materials, and other educational resources. In the past few years, the company has also made strides in digital learning to address the ever-evolving learning needs of the Filipino learners. — As released