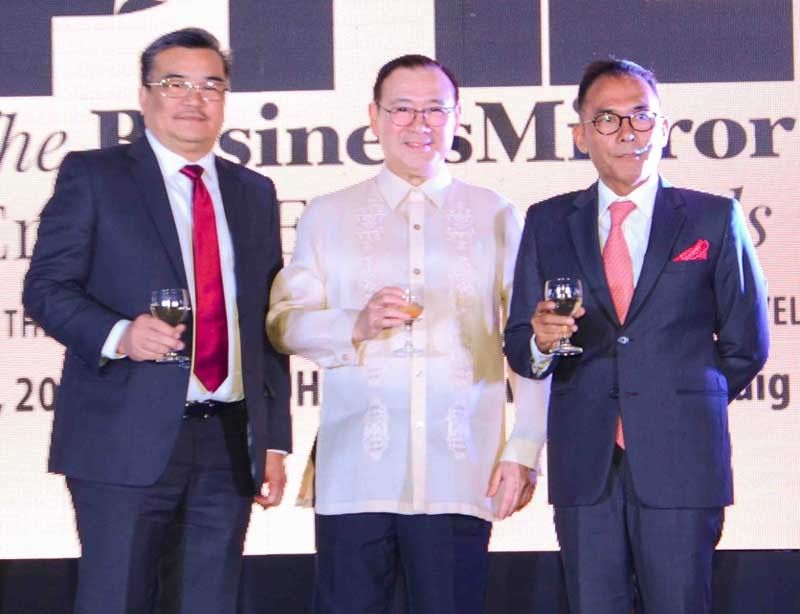 High-powered members of the diplomatic corps and development-aid agencies recently gathered at the “Mission: PHL, The BusinessMirror Envoys and Expats Awards Ceremony,” held at the Samsung Hall of SM Aura Premier.

During the event, palanggas, embassies, consulates, economic and cultural offices, and aid agencies were acknowledged for their support to the Philippines in the sectors of science and technology, infrastructure, tourism, environment, transportation, agriculture, education and trade.

The Embassy of Australia was named “Embassy of the Year” and also won the Education of the Nation Award.

The Embassy of Japan had four grand category awards. The Delegation of the European Union, on the other hand, got the “Project of the Year Award” for the Establishment of Model Recovery Clinics (Voluntary Outpatient-based Medical Treatment Facilities for Drug Users).

Other aid agencies were also given recognition during the event: the United Nations Development Program (UNDP) for Biodiversity; World Bank for Agriculture and Fisheries; and the Government of Australia–Department of Foreign Affairs and Trade (GOA–DFAT) for Education of the Nation Award.

“Mission: PHL” was made possible through eight government agencies: the Departments of Environment and Natural Resources, Agriculture, Trade and Industry, Science and Technology, Public Works and Highways, Transportation, Tourism and Education. It is one of many enriching events held at SM Aura Premier.

How are the relations these days between the United States and the Philippines?

If we were to ask the gentleman of all seasons Joey Antonio, the President’s Special Envoy to the United States, palanggas, the ties appear stronger than ever.

The two envoys went to Manille in separate trips and met with diplomats and business leaders, as arranged by the US Embassy and led by the well-respected US Ambassador to the Philippines Sung Kim, dahlings. Present at those meetings, and trés visible, were Finance Secretary Carlos Dominguez, Executive Secretary Salvador Medialdea, SM Investments’ Tessie Sy-Coson, Joey Antonio, who is also chairman and the genius behind the super successful Century Properties Group; former Philippine Ambassador to the Philippines Jose Cuisia Jr., Udenna Corporation’s Dennis Uy, Poongsan Group chairman Jin Roy Ryu, and Jaime Zobel de Ayala on the rare night out, among other namedroppables.

Most Filipinos will remember the United States’ latest goodwill gesture of returning the Balangiga bells to the Philippines after more than 100 years. It was to mark a turnaround and signal a renewed cooperation between the US and the Philippines, a strong relationship founded on shared history and interests.

“Such ties run deep and are sealed not only by several defense treaties but also the presence of four-million-strong Filipinos in the United States and American companies that are contributing to foreign direct investments, taxes and employment here at home. So while our government is busy nurturing new ties with other nations, which it must do for economic reasons, it’s safe to say that America is here to stay,” explained Ambassador Antonio.