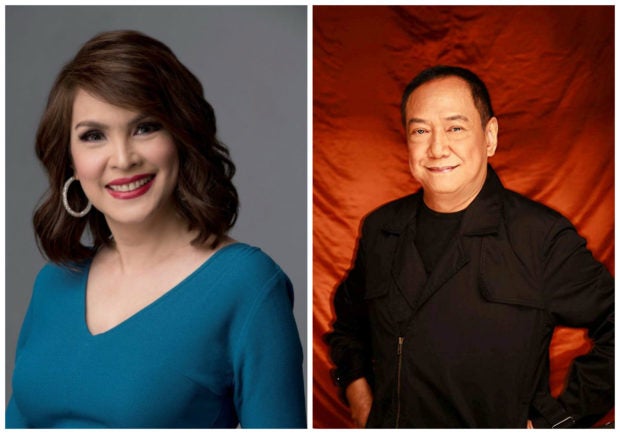 Aside from their pop music roots and the enduring love ballads they popularized, Basil Valdez and Jamie Rivera are also known for their affinity for inspirational music.

And they don’t merely sing or listen to it—they try their best to live by its message and use it as an instrument to touch people’s hearts.

“When you sing such songs, you have a responsibility, not only to yourself, but to other people, as well,” Jamie told reporters at a recent press conference for “Love and Light,” a Valentine dinner-concert she will headline with Basil on Feb. 13 at Dusit Thani Manila’s Mayuree Grand Ballroom (call 8891-9999).

“Of course, some people may have this image of you as someone who’s faultless. But no one is. We’re all human. But still, we try to live up to the things we sing about,” added Jamie, who’s known for her renditions of the “Jubilee Song” and “Only Selfless Love,” which she performed with other singers for the late Pope John Paul II during the 2003 World Meeting of Families.

Jamie, who also performed her original composition “We Are All God’s Children” in programs related to Pope Francis’ apostolic visit to the Philippines in 2015, doesn’t mind being dubbed as an “Inspirational Diva,” despite the pressure that comes with the title.

“After all, being Godly … it’s something that we should all aspire to be. And as you get old, you experience more things, you realize your mistakes, you acknowledge the things you have to change, or can’t do again,” Jamie pointed out.

In 1993, Basil released the studio album “Salmo,” which features such inspirational tunes as “Lift Up Your Hands,” “Sundin ang Loob Mo” and the George Canseco-penned “Ama.” “You really need to live the songs you sing. That’s quite the challenge. When I first released the album, I felt like I wasn’t allowed to make mistakes anymore, especially because we’re in the public eye,” he said.

And while he rarely writes songs, Basil is proud that his voice has served as an instrument to inspire. “I allow myself to be used by the Lord and some of the country’s greatest composers to bring life to their songs,” related the OPM icon, whose faith has only gotten stronger over the years.

“I have a deeper sense of spirituality,” he said. “I have been praying the Rosary since January 2009, and I haven’t missed a day. I have been prayerful; I maintain a personal relationship with Him. I talk to the Lord every day, and give back the glory to Him.”

Another thing the two artists have in common is that they both entertained thoughts of joining religious orders when they were young: Basil considered priesthood; Jamie, nunhood. “My family was prayerful and I grew up praying the Rosary with them. I had plans of entering a convent, but that changed over time,” she said. Basil, who took up Philosophy in college, mulled studying Theology afterward and, at one point, “really wanted” to enter the seminary. “I truly enjoyed those things. I consulted my Jesuit friends about the possibility of entering, but they reminded me that I’m a singer and that I can use my voice to help people,” he related. “They said, ‘That’s a gift from the Lord—use it.’”

Still, they found themselves in a unique position to inspire. “When we see people singing our songs or using them for worthy causes … that’s heartening. You get to touch others’ lives and, in turn, they change yours. Singing for people in need and listening to their stories has changed me,” Jamie said. “I gain more insights as I continue to perform inspirational songs,” Basil added. “At 68, I will continue to perform as often as I can continue making people happy with the music I interpret.”

A royal wedding in Negros

Flipped vs Blended Learning: What distance learning method is best for your child?