MANILA, Philippines — Everything we hear can be broken down into a sound: the sine wave. It’s a pure tone, containing neither noise nor overtone, that approximately sounds like a tuning fork or a singing wine glass. The Sine Wave Orchestra gently reminds us that this is fundamental to everything we hear: voices, a chainsaw, and thunder crackling in the distance.

The Sine Wave Orchestra, initiated by Ken Furudate, Kazuhiro Jo, Daisuke Ishida, and Mizuki Noguchi in 2002, is a continuing project that concerns itself with the titular waveform. The immersive installation and performance titled “Stay” kicked off the recent new media and experimental sound art festival billed as “WSK X: Festival of the Recently Possible.” Installed in the Doreen Black Box of Areté, Ateneo de Manila University, the work comprised of 49 spiraling columns of copper wire arranged in a square grid, and 1,000 custom-made devices.

Each device is small enough to fit in the palm of your hand, with a small knob to adjust the frequency or sound it emits. This is the missing piece of a circuit powered by the copper wires suspended throughout the space. Once the devices are attached, they begin to rumble, whistle, or hiss, depending on the choice of who left them. The work allows its textural complexity and subtlety to develop over time.

The sound is essentially simple, but the result of it all is anything but. As the additions to the installation accumulate, its timbre develops. At the start of the exhibition, the Doreen Black Box was silent, save for the faint hum of the air conditioning. As people entered the space to attach the devices, sounds began to spring up. Each of these devices will continue to resonate over the next 12 days as more additions come in, until the exhibit closes. What it evolves into is unpredictable, and is dependent on who takes part. 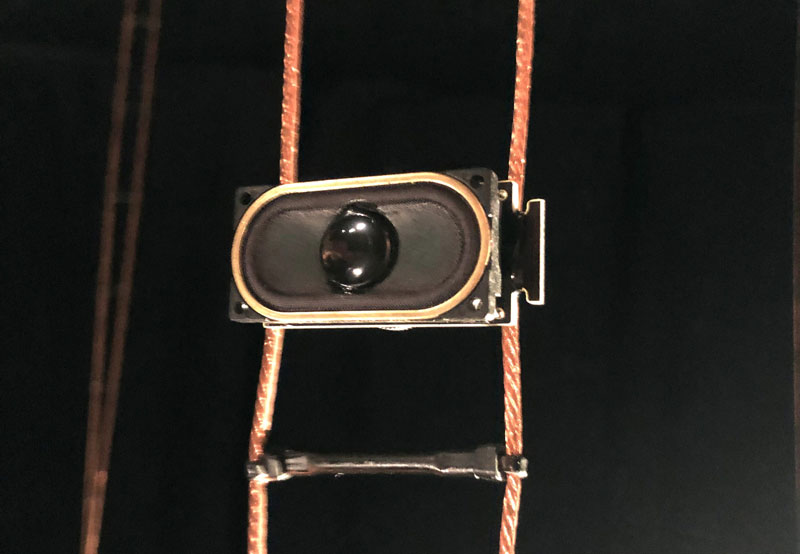 At the opening, The Sine Wave Orchestra handed out stickers proudly declaring, “Believe your sine wave.” Here, the rules of harmony, song structure, or composition do not apply, nor does a participant have to be a professional musician to take part. The sine waves left by a classical pianist and a tone-deaf karaoke fanatic are equals by virtue of the uniformity of the devices both in form and in sound. The kind of texture and tonal qualities that “Stay” permits is more elusive than music on the radio.

Each visitor has the leisure of wandering around the space until they find the right spot to leave their mark, turning the spectator into a participant. What one hears is just as much about the physical space surrounding the listener and the object. The devices in “Stay” are engineered just loud enough to be heard within a radius of roughly two meters. With an installation of this scale, the sound varies as udience member weaves in and out of the copper forest. The collective accumulation of these deliberate frequencies via the individual’s roaming position within the space is the closest this work comes to a conductor.

The artists positioning as an orchestra is an inventive take that critiques the primacy of ego in music. In the practice of classical music, the conductor leads an ensemble through the motions of the composition. There are composer-auteurs shaping the interpretation of a musical piece intended to be rendered clear, distinct, and often loud--orchestrated, so to speak. In “stay,” the hierarchies are quietly demolished, along with the barrier that separates musician and audience.

Sound pioneer Brian Eno’s ventures into ambient music were incited by a period in which he ended up confined in a hospital after an automobile accident. Harp music was playing on the radio, but it was at a volume nearly imperceptible to him. Unable to stand up to adjust the loudness, Eno began to listen to the music as ambient sound, mingling and merging with the qualities of the space surrounding it. Likewise, “Stay” offers the increasingly rare opportunity of fixating on a specific sound at length that hardly occurs in urban landscapes. The black box transforms into a reprieve from the cacophony of the Katipunan traffic crawling by just a block away. It’s all at once a durational participative performance-slash-installation, a multiplicity of sound pieces with no start or end, and an orchestra that headily proceeds even without anyone present to hear or play it. No virtuosos or grandiose overtures are to be found here. Just a hum that grows deeper and wider over time.