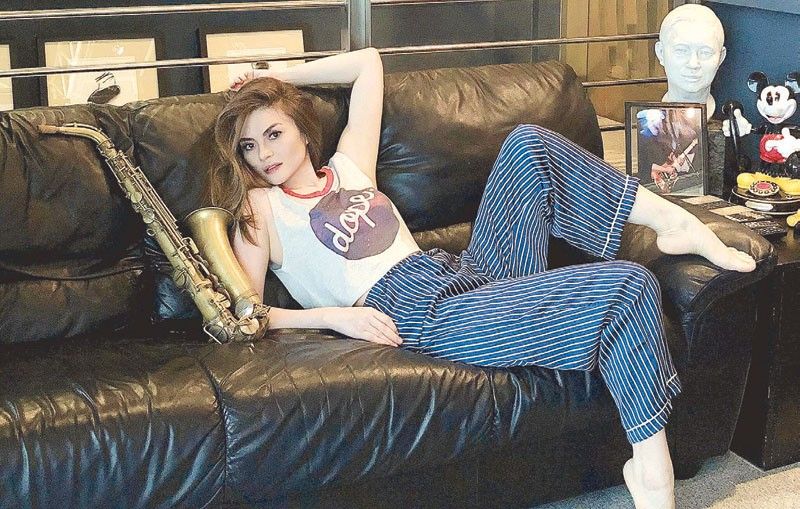 Here’s a recurring nightmare: What if we’ll be remembered not by the perfectly choreographed OOTD we last wore before the ECQ but by the terribly misshapen, over-laundered, at-home wear of the last few months?

Most of the Philippines’ working women started the quarantine with the best intentions, confident that it would last only a couple of weeks, a month at worst. We still painted our eyebrows, daubed on our lipstick and pulled on a nice blouse and slacks to wear around the house. (Could that have been partly because most 9-to-5’ers had precious little in the closet to get them through the sudden Work-From-Home order?) 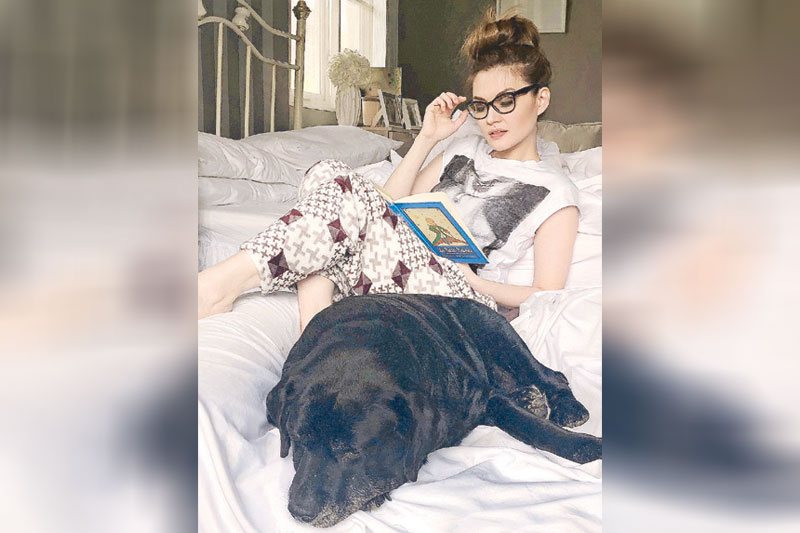 Beauty and the beast: Reading in a rock T-shirt with her dog.

As the ECQ stretched on, however, fashion slid down what both economists and philosophers call the “slippery slope,” straight into the territory of what snooty New Yorker magazine called the kingdom of “Slob Chic.”

The gateway drug to this new addiction was none other than the caftan. This article of clothing was regarded by my mother as “the beginning of the end” as far as respectable standards of appearance went. Mind you, she came from that generation that prescribed wearing girdles 24/7 and believed the only dresses worth putting on had tightly-cinched waists. Even at home, dear old Mom wore draped floor-length sheaths — worthy of Norma Desmond in Sunset Boulevard — in clingy jerseys she called loungewear. Mother must have been 85 before she was finally persuaded to wear an actual caftan. As for me, the Valley of the Dolls versions in wild Pucci-esque prints had me at “hello.” Fortunately, so did Rustans.com, which quickly classified Natori as part of the “essentials” that could be delivered during the lockdown.

But by then it was too late. Most of Manila’s women had gone the way of tattered T-shirts and boyfriend shorts, loud pajamas fit only for color-blind infants and God-Save-the-Queen “dasters,” secretly despised by husbands throughout the country.

Early attempts to go “athleisure” with leggings and Flashdance-type leotards would eventually be denounced as “too sexy for your shirt,” when the hard times called for plainer, more ascetic gear. Jeans were likewise tossed aside by the American fashion press into the “What Are You Trying to Prove?” category. 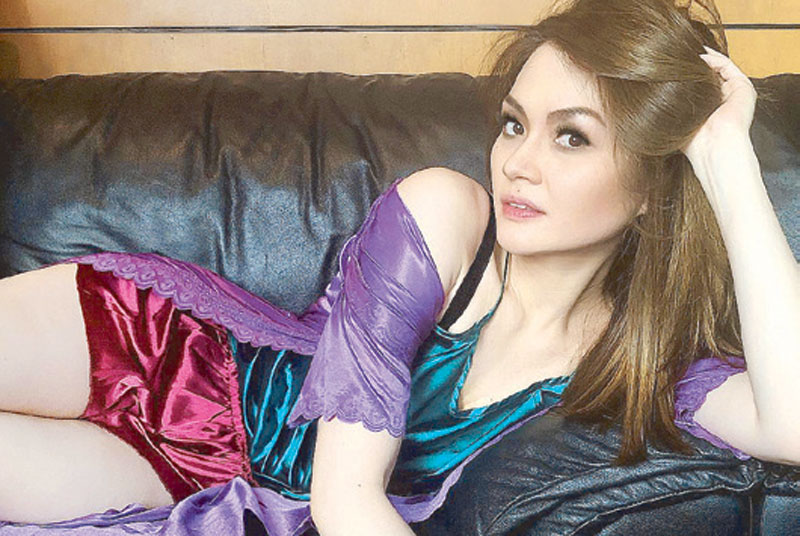 Rainbow connection: A color-blocked teddy set is the height of sexy chic.

All attempts at keeping track of your hips were therefore silenced; ditto for “thigh gaps.” For those not in the know, my fancy-pants designer friend defines them as “the female equivalent of six-pack abs for men.” Thigh gaps are quite emphatically the holy grail of all female body types. Wide-legged pants and drawstring pajamas worn for the lockdown, however, sidestep their absence cleverly.

As we ease our way back to normality, new or otherwise, here is a little tour created by multimedia star Maxine Syjuco. As the youngest child of avant-garde artists Cesare and Jean-Marie Syjuco, Maxine has been described by her avid collectors as “intelligent and whimsical” but also “dark with a sometimes visceral subtext.” All in all, she is the perfect spirit guide to find our way back to fashion sanity.

Sheltering in place in chez Maxine consists of high-waisted pants worn with sleeveless shirts, butcher’s aprons layered over leggings, micro-mini shorts as well as plenty of pink plaid PJs. She’s put together outfits for our newly DIY world, where you can’t be more overdressed than the repairmen who come in face-shields and PPEs. (Coveralls are a good choice since they can slip over more relaxed wear.) 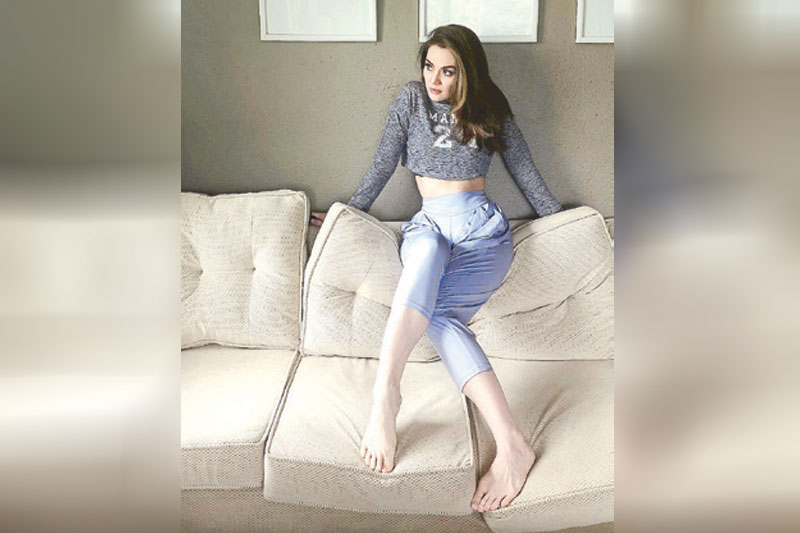 Bridging the thigh gap: On the couch again in mauve capris and a cutoff football tee.

Salons, gyms and restaurants have just been shut down for another interminable “timeout,” so there are ensembles for exercise, kitchen patrol and reading parties for one. Those consist of Daisy Mae cut-off shorts as well as sultry teddies for the times when home delivery of that newfangled “sushi bake” has been cancelled. (I suspect sushi bakes were invented to battle our fear of eating raw food at this time.)

There are also long-sleeved shirts with roomy shoulders for pacing around your garden. (Will we ever return to narrow armholes?)

Hair is pinned up in ponytails, chignons or left as rather untamed tresses; feet are unshod or in cloth espadrilles, the better to zap with UVC light. Maxine presents plenty of provocative options for coping with today. 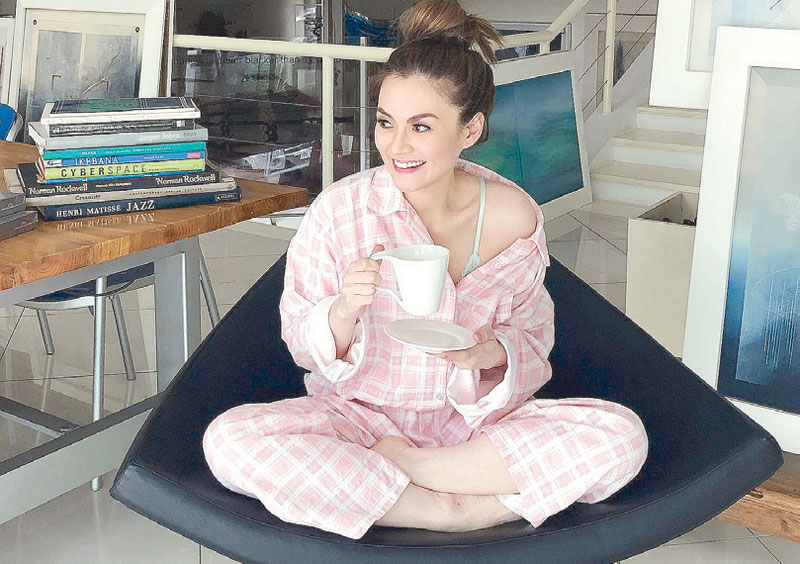 Woke up like this: Pink plaid pajamas are perfect for morning coffee.

In the current haze of Netflix binges, one girl-power movie, Ocean’s 8, stands out: Debbie Ocean (played by Sandra Bullock) comes out of prison, shielding her eyes from the bright sunlight of day while wearing the sequin-covered evening dress she was arrested in. It’s fashion shorthand for how strange and inappropriate our former lives were amid the new reality.

Suarez can take Atletico to a different level, says Simeone

Tony Labrusca responds to being told 'you're so gay'

16 dead from carbon monoxide poisoning in Chinese coal mine

Cayetano gets support of House minority bloc amid speakership issue