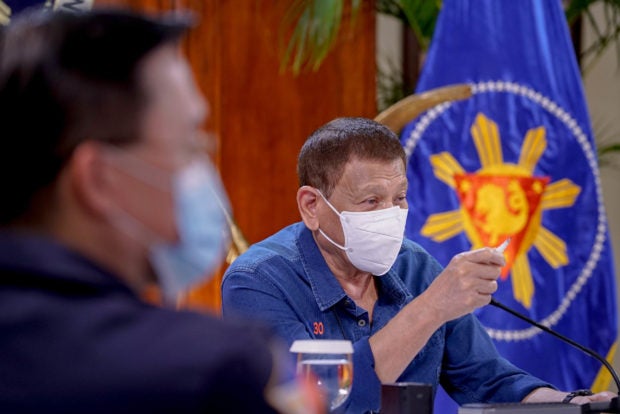 MANILA, Philippines — President Rodrigo Duterte warned on Monday officials found to be involved in corrupt practices in the Philippine Health Insurance Corp. (PhilHealth) that he would go after them.

[Make no mistake about it. These PhilHealth officials, I told them: I’ll get you. Believe me. Now for those who are innocent, you have nothing to worry about. Just keep quiet and continue working.]

These corrupt PhilHealth officials might have eluded detection during the previous administration, but he said he would get “get rid” of them.

“With the help of my Cabinet members,” he said partly in Filipino. “— I’m not bragging, but, these are just  simple people. Why? Why are they really helping me to get rid of you? If at all possible, I’lll kill you. You know [they’re helping me]? Because simply they love their country.”

Duterte had already ordered the Department of Justice to form an to investigate the corruption allegations against some PhilHealth officials.

In a Senate hearing last week, lawyer , who resigned as anti-fraud officer of PhilHealth, claimed that more or less P15 billion was “wasted or stolen” due to fraud.

Video games As a tool to prevent COVID-19

Biden to focus on health care in Supreme Court debate

Nude food delivery biker let off with a fine