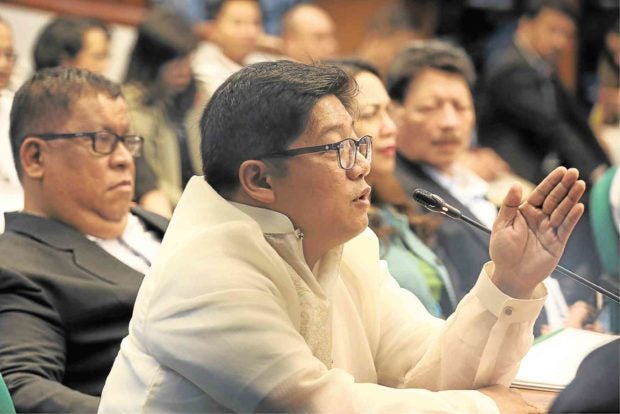 Doctors and health care providers are not the ones defrauding the Philippine Health Insurance Corp. (PhilHealth). It’s the other way around.

Or so claimed ophthalmologist Dr. David Harold Gosiengfiao who admitted in a Senate hearing on Thursday that he had paid P7.3 million to a PhilHealth official to facilitate the release of some P40 million in benefit claims owed him by the state insurer.

At the resumption of the Senate hearing on alleged fraudulent activities in PhilHealth, Gosiengfiao said that over the years, the state insurer’s unpaid claims to him have reached P73 million for such procedures as cataract and glaucoma.

While he was paid P38 million sometime in 2015, no further payments were made as several cases were filed against him for his supposed anticompetitive behavior.

Gosiengfiao claimed that a certain “Atty. Aldon” working for PhilHealth approached him and “extorted” an initial P2 million and another P7 million for the release of his claims.

He said Aldon had told him he was working for then PhilHealth legal services sector chief Eduardo Asuncion.

Gosiengfiao could not, however, say for certain if Asuncion did receive the money he gave.

Though Gosiengfiao’s Pacific Eye Institute (PEI) charged PhilHealth for its procedures, it didn’t bill patients for tests and checkups done on them, a practice that the Philippine Academy of Ophthalmologists had objected to, he said.

“They said eye checkups shouldn’t be given free. This anticompetitive behavior was the chip they used to withhold money and call me a fraudster,” he later told reporters.

In 2015, the Senate looked into PEI as part of its investigation into the cataract scam. At the time, numerous cataract claims were being filed with PhilHealth, making it the fifth leading medical procedure with a payout amounting to P2.3 billion.

As this developed, Commission on Audit (COA) chair Michael Aguinaldo said in the hearing that the agency would conduct a performance audit on PhilHealth’s all case rate (ACR) system to determine if the policy should be continued or not.

Introduced in 2013, the ACR replaced the fee for service scheme which was prone to abuse. For instance, some hospitals would prolong the stay of patients under their care to be able to collect more claims.

“The audit is to see what are the efficiencies, defectiveness [of the ACR]. We won’t recommend what to use, that’s a policy decision, but we can provide data on how it has operated so far,” Aguinaldo said.

PhilHealth insiders estimate that the state insurer overpaid doctors and hospitals P102.5 billion from 2013 to 2018 due to a lack of review of the ACR. COA Northern Mindanao found that PhilHealth had overpaid by about 20 percent in all the cases it processed.