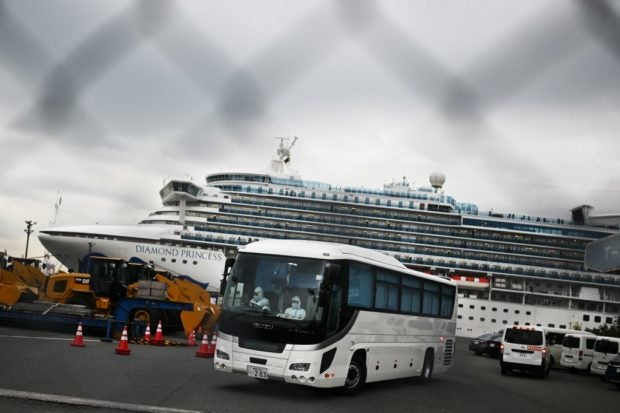 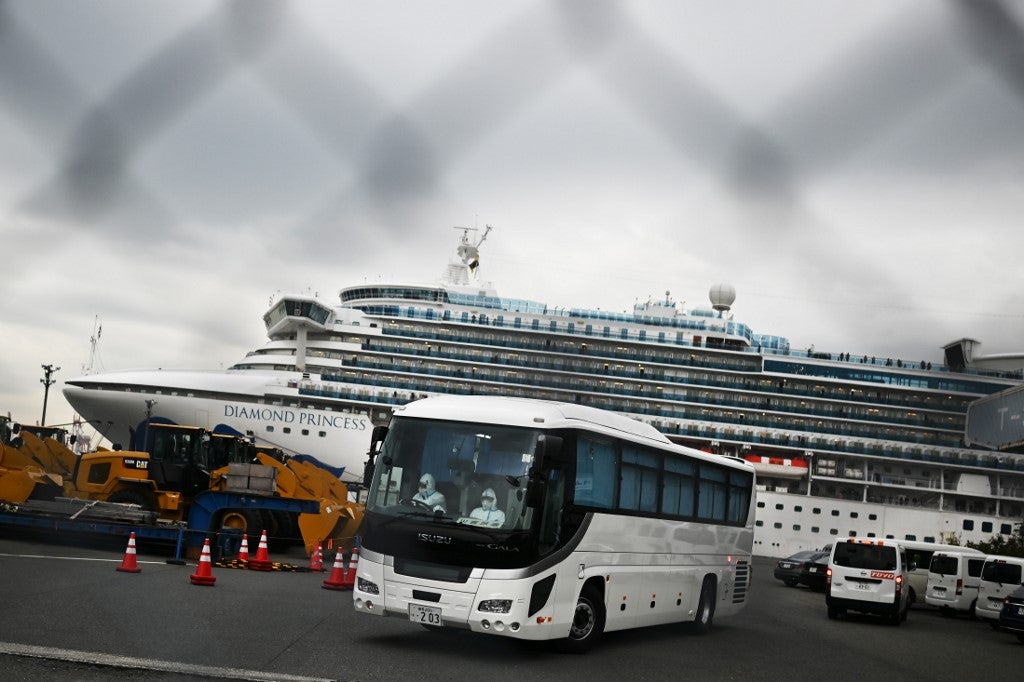 A bus with a driver (L) wearing protective gear departs from the dockside next to the Diamond Princess cruise ship, which has around 3,600 people quarantined onboard due to fears of the new COVID-19 coronavirus, at the Daikoku Pier Cruise Terminal in Yokohama port on February 14, 2020. (Photo by CHARLY TRIBALLEAU / AFP)

TOKYO, Japan — The number of people who have tested positive for the new coronavirus on a quarantined ship off Japan’s coast has risen to 355, the country’s health minister said Sunday.

The new figures came as the United States was preparing to evacuate some of its citizens from the Diamond Princess, which has been in quarantine since February 5 in the port of Yokohama, near Tokyo.

Hong Kong also said it would offer its 330 citizens on board the chance to take a charter flight back. Canada, too, announced a similar decision to repatriate its nationals on the ship.

“So far, we have conducted tests for 1,219 individuals. Of those, 355 people tested positive,” health minister Katsunobu Kato told a roundtable discussion on public broadcaster NHK — a rise of 70 from the last government toll.

Japan’s efforts to control the viral infections on the vessel have prompted international concern.

The cruise ship arrived off the Japanese coast in early February with more than 3,700 passengers and crew members from more than 50 countries and regions.

It was placed under quarantine after authorities found that a passenger who got off the boat in Hong Kong during its voyage tested positive for the virus.

Officials kept finding new infections among the passengers and crew members and transporting them to Japanese hospitals, while others have been told to stay inside their individual cabins during the 14-day quarantine period, which should end on Wednesday.

Japan has not been able to test all those on board due to limited supplies of testing kits, facilities and manpower that are also needed by authorities tracking the spread of the virus among the general population.

“Based on the high number of COVID-19 cases identified onboard the Diamond Princess, the Department of Health and Human Services made an assessment that passengers and crew members onboard are at high risk of exposure,” the US embassy said in a letter to its passengers.

The US, Canada and Hong Kong said those repatriated will go through another two-week quarantine period at home.

The captain of the Diamond Princess has told passengers that the Japanese government might start testing them for the virus from Tuesday, and those with negative results would be allowed to get off the ship from Friday.

How to help kids with Autism cope with quarantine