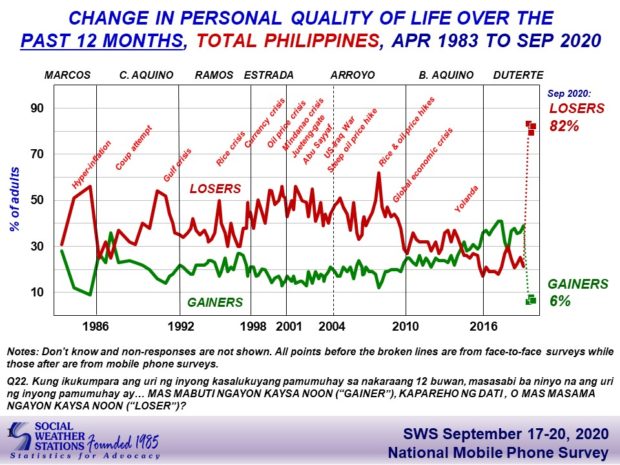 MANILA, Philippines — Four out of five adult Filipinos said their quality of life has worsened in the past 12 months, according to the latest survey of the Social Weather Stations (SWS).

The survey conducted by SWS from September 17 to 20, 2020 showed that 82 percent of adult Filipinos believed that their quality of life worsened (termed by SWS as “losers”), while 11 percent said it was the same, and only six percent said it got better (termed as “gainers”).

The result of the survey was released Wednesday night.

SWS considers the score “catastrophic” if it is -50 and below.

“The September 2020 score joins SWS’s worst trends in survey history, having recorded -78 in May and -72 in July during the COVID-19 crisis. The only other time the score reached catastrophic level was in June 2008 (-50), during rice and oil price hikes,” SWS said.

According to the survey, the net gainers score stayed “catastrophic” across the country, with a score of -80 in the Visayas, -76 in Metro Manila, -75 in Balance Luzon, and -74 in Mindanao.

SWS said the net gainers scores have worsened in all areas in the country compared to figures in July.

Meanwhile, the net gainers score is significantly worse among those who did not graduate from college.

Survey results further show that adults from families that were involuntarily hungry in the last three months posed a higher losers score than those that were not.

SWS said the net gainers score was -84 among the hungry, compared to -72 among those who did not experience involuntary hunger.

The survey likewise found that hunger rate is significantly higher among “losers.”

Meanwhile, 23 percent of gainers and 17 percent of those whose quality of life was the same  in the past 12 months went hungry.

SWS conducted the survey using mobile phone and computer-assisted telephone interviews of 1,249 adult Filipinos or those aged 18 and above.

The respondents are comprised of 309 adult Filipinos in Metro Manila, 328 in Balance Luzon, 300 in Visayas, and 312 in Mindanao.