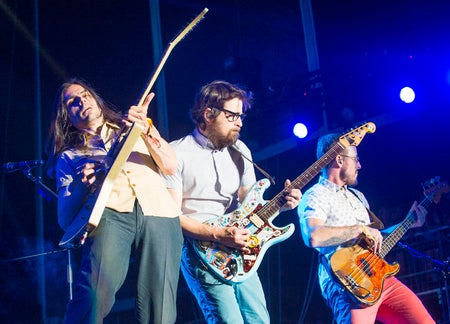 “California Snow” will appear during the closing credits for the upcoming film “Spell”, which will arrive in select United States theaters Nov. 15 and on-demand services on Nov. 19.

This dark comedy thriller stars Barak Hardley as a grieving American illustrator who goes on a soul-searching journey in the Icelandic countryside after the sudden death of his fiancée (portrayed by Jackie Tohn).

As he runs out of medication, he quickly wonders whether his compulsions are related to his mental disorder or if he is drawn into the supernatural world of ancient runes.

Ahead of the film release, Weezer have unveiled the accompanying music video for “California Snow” which was helmed by “Spell” star and director Brendan Walter.

The visual features footage from the upcoming movie, along with scenes in which Walter is trying to overcome his grief with a deranged therapist portrayed by Adam DeVine.

Although the actor does not star in “Spell”, he takes center stage in the video for “California Snow”, furiously playing bongos bare-chested and forcing his patient to sing along with him in a bizarre therapy session.

“Back in 30 minutes, high as I can get it/Give me everything you got/I could move a mountain, solve a thorny problem/Lava’s gonna flow so hot,” Rivers Cuomo sings over an electro pop-rock beat.

The Weezer frontman also makes a cameo in “Spell” as Hardley’s seemingly unreachable psychiatrist. Cuomo is not the only musician involved in the project, as the film has been scored by Fall Out Boy’s Patrick Stump.

In addition to “California Snow”, Weezer has recently shared the single “End of the Game”, which is slated to appear on their forthcoming new album.

Next summer, Weezer will embark on the “Hella Mega Tour” with Green Day and Fall Out Boy, whose North American leg will kick off on July 17 in Seattle. JB