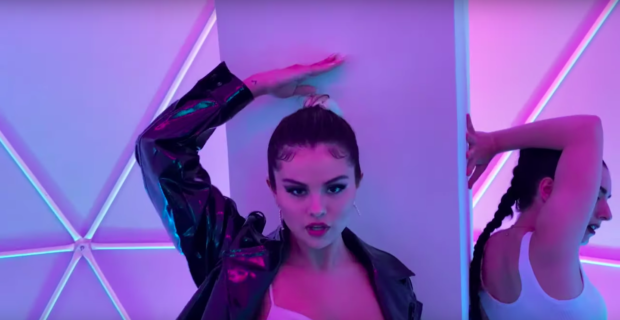 “Look at Her Now” marks Selena Gomez’s second single of the week, following “Lose You to Love Me”. The songstress co-wrote the upbeat song with frequent collaborators Justin Tranter, Julia Michaels and Ian Kirkpatrick.

In a statement, Gomez explained that “Look at Her Now” completes the self-love message of the previously released ballad, “Lose You to Love Me”.

“I felt having these two songs released back to back completed the story of how one can rise no matter what challenges life brings. Turning off the noise and living your life on your terms,” she pointed out.

The single arrived with an accompanying music video shot with the new iPhone 11 Pro by Sophie Muller, who also helmed the black-and-white visual for “Lose You to Love Me”.

The neon-infused clip shows Gomez breaking into an elaborately choreographed routine with a crew of backup dancers, while singing lyrics about self-resilience such as “Now she’s glad she dodged a bullet/Took a few years to soak up the tears/But look at her now, watch her go.”

“Look at Her Now” and “Lose You to Love Me” will likely appear on Gomez’s forthcoming third studio album, which will arrive at a yet-unknown date.

Although details about the project are still scarce to this date, the full-length would follow her 2015 “Revival”.

Since the release of her sophomore album, Gomez has shared several one-off singles and videos, such as “Back To You” and “Bad Liar”.