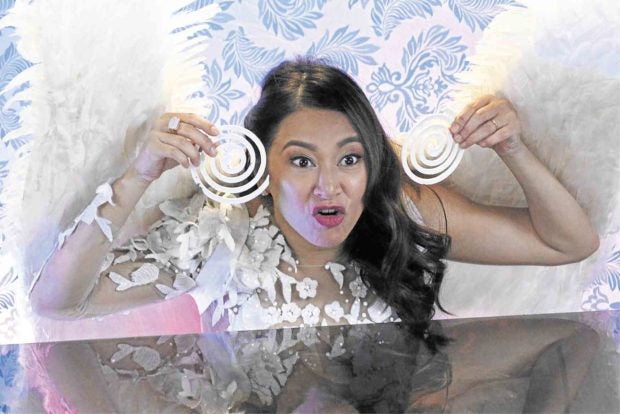 Because she was packaged as a bombshell comedian and usually appears on television in revealing outfits, Rufa Mae Quinto has had to deal with men who objectified her, or expected her to act in a certain way in person.

“I find these men annoying, because they think I’m pangkama. But I’m not that type of person,” she told reporters at a recent press conference for the comedy flick, “And Ai, Thank You.”

Her Filipino-American husband, Trevor Magallanes, didn’t have such preconceived notions. This was one of the things that made him stand out.

“I didn’t get that feeling with him. He really loved me; he didn’t make me feel disrespected kahit na gaano kalaki ang hinaharap!” she said, laughing.

Rufa Mae and Trevor tied the knot in November 2016. Since then, the actress has been shuttling between Manila, where she works, and San Francisco, where her husband lives. Despite this, Rufa Mae has never felt insecure about their relationship.

“I’m kind, he married me and he loves me so … And nagsawa na siya sa sex!” she quipped in her hilariously distinctive drawl, her hands flailing in the air. “Just kidding. He has a very serious job.”

Trevor, who had previously served in the US Air Force and worked as a financial analyst, is now a police officer. And Rufa Mae feels that it would be unfair to force him to stay with her and their 2-year-old daughter, Athena, in Manila when she has to honor her show biz commitments.

“I don’t want to rob him of his right to work or be the head of the family. I don’t want our daughter asking me what her father does for a living and telling her, ‘Wala, pinanood lang tayo habang nag-show biz ako,” the 41-year-old actress said of Trevor, who’s 32.

The couple actually finds their current setup quite advantageous, especially for their daughter, who gets to experience “the best of both worlds.”

“My loved ones are here. I have invested something here. My husband wants our daughter to learn Tagalog and experience the culture,” she pointed out.

In “And Ai,” which recently opened in cinemas, Rufa Mae plays Ursula de Villa—rival of Aileen dela Rosa (Ai-Ai delas Alas), who has fallen ill and is given six months to live. This is a reunion for the two comedians who previously worked together in the 2001 cult favorite “Booba,” which helped catapult Rufa Mae to stardom.

“Ms. Ai has always supported me. I love her, so I immediately said yes when she and our director, Joven Tan, asked me to do this film,” she said.

After giving birth in 2017, she thought she would never be able to make a show biz comeback.

“I had to stop while I was pregnant because I was already 37 then. So I was usually on bed rest,” she recounted. “I didn’t believe I had anything to return to. But, I got a call from ABS-CBN, asking me to join the cast of ‘Home Sweetie Home.’ Then, the projects started coming again.”

“I remember Ms. Ai did ‘Ang Tanging Ina’ when she was 40, and became an even bigger star … my situation did make me think about that,” added Rufa Mae, who’s also thankful to the millennials who love making memes out of her scenes from “Booba” and “Super B,” as well as her general wackiness.