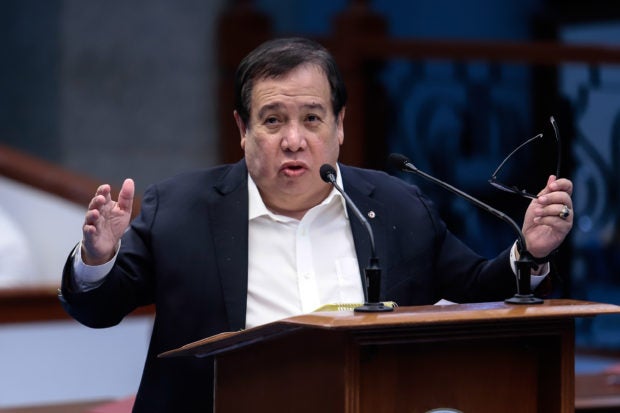 MANILA, Philippines — A senator asking in jest to permanently  “mute” Senator  Richard Gordon could be heard as the Senate began conducting a  hybrid session on  Tuesday.

Only Senate President Vicente “Tito” Sotto   III and Senators   Sherwin Gatchalian and Francis Tolentino were physically present when the session resumed at 3 p.m.

The majority of the senators participated in the which is now allowed under the amended rules of the chamber.

Aside from participating in plenary proceedings, the amended rules also allow senators to cast their votes and conduct committee hearings online.

Who started the joke?

Before the session, some senators could be heard greeting Sotto while others were joking about Gordon, who is known for giving lengthy speeches and interpellation.

Riding on the joke,   Majority Leader  Juan Miguel  Zubiri suggested that they could just turn the volume of their computer off and “do other things” when Gordon starts giving long speeches.

The  Majority Leader later turned serious as he moved to proceed with the reference of the business of the chamber.

At one point during the session, Zubiri declared as successful the “historic” conduct of their teleconferencing session.

“It’s a novel way of conducting sessions in the Republic of the Philippines. This is historic, the first time in the history of our republic that we’re doing this…” he said.

“It looks very successful. So far,  so good and I think even our  Minority Floor Leader is no longer requesting an automatic mute button…” Zubiri added as he recognized  Minority Leader Franklin Drilon.

But Drilon said placing a mute button for Gordon was actually Zubiri’s idea.

ABS-CBN: 'We will continue to be a responsible content producer'