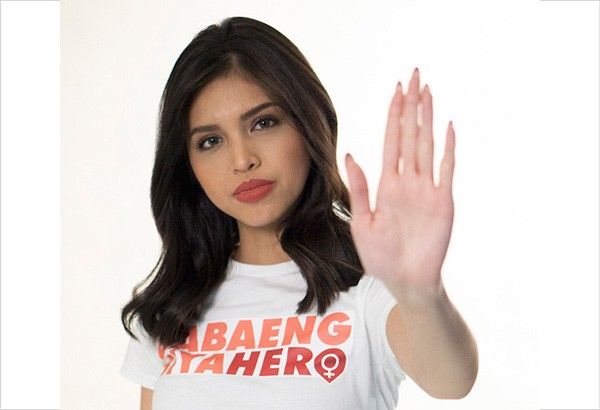 MANILA, Philippines — To mark the International Day for the Elimination of Violence Against Women yesterday, actress and TV host Maine Mendoza was launched as the new “celebrity champion” of Filipina migrant workers via Babaeng Biya(hero), the national campaign of “Safe and Fair: Realizing women migrant workers’ rights and opportunities in the ASEAN region.”

According to non-government organization Safe and Fair Philippines, which organized the campaign, “Mendoza has proven herself to be a staunch ally of workers here and abroad through her personal endeavors and roles portrayed in TV and film projects.”

The “Dubsmash Queen” was also chosen as new ambassador because she espouses the organization’s values of an empowered force who has the capacity to inspire her fellow women, especially during these unprecedented times.

“For decades, Filipina migrant workers have faced, but have also stood up and campaigned against abuses, violence and labor exploitation. The violations continue, and have been worsened by the COVID pandemic,” shared International Labor Organization National Project Coordinator Rex Varona in a statement sent to Philstar.com.

“So we want to support the continued organizing, campaigns and advocacies of the women Overseas Filipino Workers (OFWs). We greatly appreciate Maine’s support and participation in our Babaeng BiyaHero campaign, since this will greatly boost the advocacy efforts of the women OFWs. Her involvement will help inspire more women OFWs to join the Babaeng BiyaHero journey towards ending violence against women, and in making labor migration safe and fair especially for women.”

"With the lockdown, women migrant workers, including those who remained in destination countries or were forced to return home, are trapped with abusive family members, employers and perpetrators of sexual and gender-based violence,” she said.

“Mobility restrictions have further reduced the ability of women migrant workers to seek assistance and access essential services such as psychosocial support, financial aid, or alternative shelter. Women migrant workers are inherently empowered, and with Maine’s support, we hope to further extend this message to the whole community - it is time we give back to our babaeng biyaheros - who have given so much for their families and our country.”

“I feel grateful to be a part of this initiative since it’s something close to my heart, especially after being exposed to a lot of opportunities that helped me understand their situation. I look forward to bringing awareness and educating more people about how we can create a culture of safety and security for our women here and abroad.”

Babaeng Biya(hero), a play on the words “biyahe” (Filipino for journey) and hero, aims to increase Filipina migrant workers’ and their families’ access to important information and essential services throughout the different phases of migration: pre-departure, in transit, on- site/abroad and upon their return.

Now on its third year of implementation, the Babaeng Biya(hero) initiative can help out more Filipina migrant workers through its website, mobile app, helpline, and the upcoming “May I Help You?” information kiosk in major airports to be launched next month.

This initiative also kick-started the global campaign, 16 Days of Activism Against Gender-Based Violence, from November 25 to December 10 (Human Rights Day). The Philippine version of the campaign is the 18 Days Campaign to End Violence against Women, which is extended until December 12, when the Philippine government signed in 2000 the United Nations Optional Protocols against human trafficking and smuggling.

According to the State of the World’s Girls (SOTWG) Report 2020, a research conducted by Plan International across 31 countries with over 14,000 girls and young women, online abuse is silencing girls’ voices. More than 50% of girls surveyed from around the world have been harassed and abused online. Oe in four of the girls abused online feels physically unsafe.

In the Philippines, the report’s findings show that seven in 10 girls and young women have experienced harassment on social media; eight out of 10 have received threats of sexual violence online; and more than half are harassed online by people they know. The report also states that girls and young women with intersecting identities are more vulnerable to online harassment.