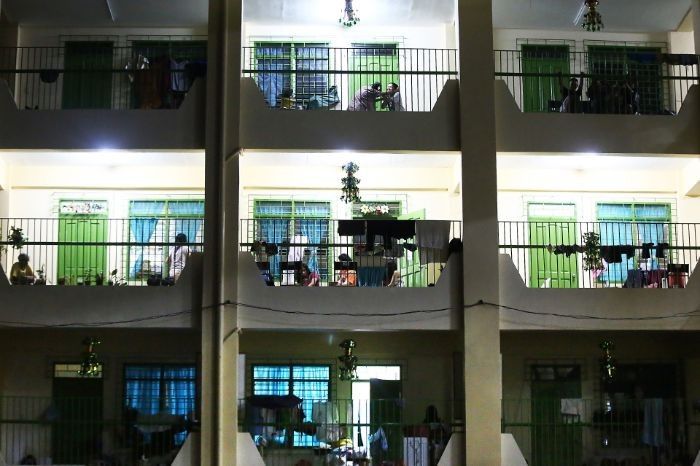 MANILA, Philippines — Disaster risk reduction experts on Wednesday called on Congress to allocate funding for safe and resilient evacuation centers to better prevent casualties and reduce the spread of coronavirus.

In line with this, experts from the University of the Philippines Resilience Institute and advocacy group Agap Banta urged that the establishment of a National Evacuation Center Investment Program (NECIP) be prioritized in the 2021 budget.

This comes on the heels of typhoons Quinta, Rolly, and Ulysses which lashed the Philippines for three weeks in a row. Experts said these calamities displaced over half a million families across eight regions.

Before this onslaught, Agap Banta had already warned that the overlapping of another disaster with the pandemic response and recovery would be “overwhelming" for the country.

Meanwhile, UPRI has long been "advocating for a review of the location of evacuation centers nationwide to take into account the impacts of climate change and the cascading effects of multiple hazards, including epidemics,” Dr. Kristoffer Berse, director for Research and Creative Work, was quoted as saying in a separate statement also released by Agap Banta.

As shelters filled up last week due to severe flooding, senators cautioned against the 'superspreading' of coronavirus in evacuation centers, urging the implementation of physical distancing and the distribution of masks and alcohol.

In a statement released by the group on Wednesday, disaster risk reduction experts said the NECIP should "target highly vulnerable [local government units] affected by typhoons" and include "audit, standards, validation, construction and/or upgrading of evacuation centers given our intersecting disasters with the COVID-19 pandemic."

Of the 270 Philippine municipalities in Vulnerable Provinces — identified by the Cabinet Cluster on Climate Change Adaptation, Mitigation, and Disaster Risk Reduction (CCAM-DRR) —  Agap Banta said 182, or 67%, do not have a permanent evacuation center. To make matters worse, 96 of these LGUs are in the 4th to 6th income class.

On Tuesday, Isabela Gov. Rodito Albano III told state-run PTV that many of the province's evacuation centers were submerged by Ulysses-induced floods. As a result, Albano added, the provincial government had no money left to test those in shelters for COVID-19, as all its resources would have to be redirected to upgrading rescue facilities and evacuation centers.

To prevent such dire circumstances from occurring again, the group suggested that the NECIP be given funds worth at least P1 billion every year for the next three years.

This allotment, Agap Banta estimates, could fund the establishment of around 120 permanent evacuation centers in "highly vulnerable LGUs," — which could house 13,500 families or 67,500 displaced individuals — as well as the retrofitting of other structures used as shelters.

It also listed the following points to further advocate for the investment:

The experts from Agap Banta and UPRI suggested that funding for NECIP be sourced from the National Disaster Risk Reduction and Management Fund (NDRRMF), the Local Government Support Fund, and the Department of Public Works and Highways Local Infrastructure Program.

— Bella Perez-Rubio with a report from Gaea Katreena Cabico