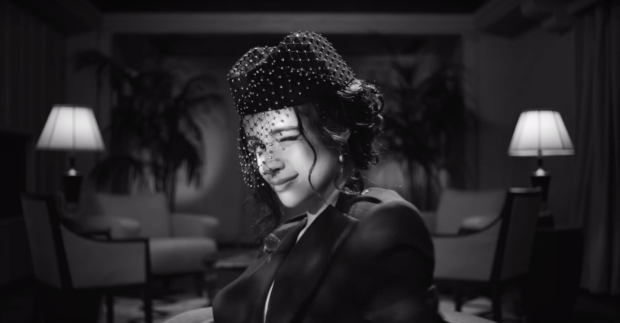 While the full-length album arrived last December, Camila Cabello recently unveiled the accompanying video for “My Oh My” that was helmed by American filmmaker Dave Meyers.

The black-and-white visual finds Cabello impersonating a glamorous silent movie star of the 1920s as she dons several Marilyn Monroe-inspired garments throughout the clip.

When she grows frustrated at Hollywood’s suffocating studio system, Cabello emancipates herself after running into DaBaby in a bar.

The up-and-coming rapper ends up buying Cabello out of her original studio contract, and the vocalist celebrates her newfound freedom by slashing one of her old film posters with a samurai sword.

“I swear on my life that I’ve been a good girl/ Tonight, I don’t wanna be her,” Cabello croons in the Frank Dukes-produced song.

“My Oh My” marks the first collaboration between the “Havana” songstress and DaBaby, who is one of the few guest artists appearing in “Romance”.

#firstman ❤️ a year ago last October I was in Nashville while on tour and I wanted to get in the studio and write because I hadn’t had the chance for quite a while.. i came in with a bunch of ideas but suddenly I just started thinking about my dad and missing him and thinking about how much he means to me. I had to go to the bathroom and just sob every 10 minutes writing this song, I could barely get through it and I almost didn’t tonight.. thank you to my dad for showing me what it is to love someone selflessly , for making me always laugh when I cry, for being my constant safety and arms to fall into. ❤️ I dedicate this to all dads out there – the ones that are with us and the ones that aren’t anymore but that we will always have in our hearts ♥️

While the Cuban-American vocalist was nominated for Best Pop Duo/Group Performance for her chart-topping duet “Señorita”, the coveted award went to Lil Nas X’s remix of “Old Town Road” with Billy Ray Cyrus.

In other news, Cabello will make her big-screen debut in the forthcoming new adaptation of “Cinderella”, which will hit theaters on Feb. 5, 2021.