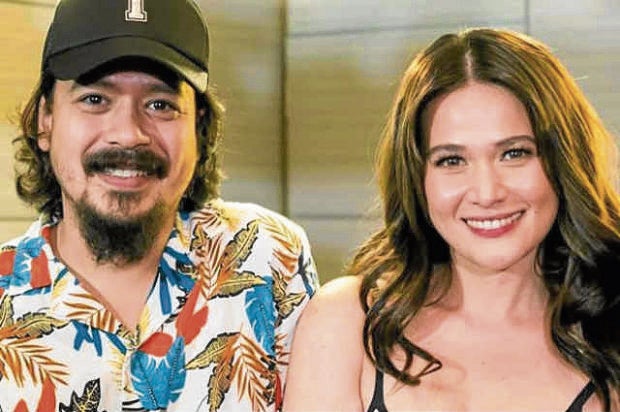 We support the reopening of cinemas nationwide. It’s just that for now, we need to find other ways to still be of service to our audience,” declared filmmaker Olivia Lamasan, who admitted that ABS-CBN Films has suffered great losses with its movie releases at the start of 2020 and then, later, with the work stoppage due to the COVID-19 pandemic.

“The theater revenues of ‘Block Z’ got affected by the eruption of Taal Volcano during its release in January. ‘Motel Acacia,’ one of our international coproductions, also suffered when news of COVID-19 broke in February. We got shocked, just like the rest of the world,” said Lamasan, who is also ABS-CBN Films managing director. “We got so affected. We’re just so glad and happy to be back in production,” she said, enumerating the projects they have lined up under Star Cinema and Black Sheep, the two production studios under ABS-CBN Films.

Of all the upcoming film projects, Lamasan is most excited about the reunion movie of John Lloyd Cruz and Bea Alonzo, which was supposed to have been shot in Florence, Italy, early this year. It’s a romance-drama with Cathy Garcia-Molina at the helm. Incidentally, Cathy was also their director in their iconic films “One More Chance” and “A Second Chance.”

Lamasan said that due to the pandemic, its writer Carmi Raymundo had tried to rewrite the material so it could be shot in the Philippines. “Unfortunately, because of this delay in script development, we were not able to meet the scheduled availability that John Lloyd and Bea gave us. We’re really embarrassed since they waited for a year for this. Sana ‘di sila magtampo,” said Lamasan.

“We’re not losing hope that this project will still materialize soon. Right now, creative development continues under Carmi,” she added. “What excites us this time is that we’ve invited John Lloyd and Bea to be its cocreators. Yes, they have reached that stature.”

Lamasan said she noticed that Cruz “has changed so much” when she got to speak with him after his two-year hiatus. “I think his rest has done him really well. It’s as if he thinks like a director now. We’re really keeping our fingers crossed for this one,” she declared.

Also in the offing is the Coco Martin-Angelica Panganiban tandem, titled “Love or Money,” which was shot in Dubai before the pandemic. It was intended for release during the canceled Summer Metro Manila Film Festival (MMFF) in April. “We only need to work on a few more scenes with them. We’re just waiting for their availability,” Lamasan said.

There’s also the Vice Ganda-Ivana Alawi project that will be directed by Cathy Garcia-Molina. Lamasan described the project as “so cute,” but didn’t elaborate on the concept.

She added: “It’s the first time that the three will be working together. We’re also keeping our fingers crossed that their schedules match. We are sharing Vice’s schedule with TV, especially since he is doing ‘It’s Showtime.’” This is a coproduction with Viva Films. Lamasan said her team is currently “courting” real and reel-life couple Liza Soberano and Enrique Gil (LizQuen) into doing another film project soon. “They’re still afraid to get back to work, which is very understandable. Most of our artists are still afraid to go out, especially since we still have incidents of hawaan (contagion) in lock-in sets. We recently submitted a sequence treatment to the two. They promised to look into it,” she added.

Lamasan said she wished the pandemic would finally end because the Kapamilya network’s other popular love team, KathNiel (Kathryn Bernardo and Daniel Padilla), is scheduled to shoot a movie in San Francisco, California. “It’s about a couple who migrated to the United States,” she reported.

ABS-CBN Films is also gearing up for the local release of Antoinette Jadaone’s “Fan Girl,” starring Paulo Avelino and Charlie Dizon, one of the artists of Rise Artist Studio (the talent management arm of ABS-CBN Films).

Lamasan described the movie, which recently premiered at the 2020 Tokyo International Film Festival, as “very daring.” She recalled how she personally picked Charlie when the latter auditioned to be a member of Rise.

“She cried during the audition because she said she just snuck out from her mom in Laguna. The mom was so angry because Charlie said she had already gone to several auditions but nothing was happening to her career. I also cried when I saw the film. I’m just so happy that she was able to prove her mom wrong,” said Lamasan.

Lamasan said she was also one of those who “spotted” John Lloyd, Bea, Liza, who are currently top ABS-CBN talents, as well as the 1990s star Kristine Hermosa.

“I also got curious the first time I saw Joshua Garcia in PBB (“Pinoy Big Brother”). That’s why when I was doing ‘Barcelona,’ I asked Mr. M (Johnny Manahan, head of Star Magic) if I could ‘try’ Joshua. I wanted to test myself if I still have that gut feel when it comes to spotting talents. With Joshua, I’ve proven that I still have it,” the director said.

This was why Star Cinema has coproduced with Regal Films the Chito Roño thriller “Ang Mga Kaibigan ni Mama Susan,” starring, of course, Joshua. The film, based on the book of the same title written by Bob Ong, is also an entry to the Christmas edition of the MMFF in December.Joshua will also be a part of the local adaptation of the Korean movie “Keys to the Heart,” opposite no less than Charo Santos-Concio, under the direction of Dan Villegas. Joshua plays the brother of an autistic child to be portrayed by Zaijian Jaranilla.

“Zaijian is really good. From playing a miracle boy in ‘May Bukas Pa’ to a gay teenager in ‘Boyette,’ to, this time, an autistic boy. I would boldly say that he is the Leonardo de Caprio of the Philippines. I wish him well,” Lamasan declared.