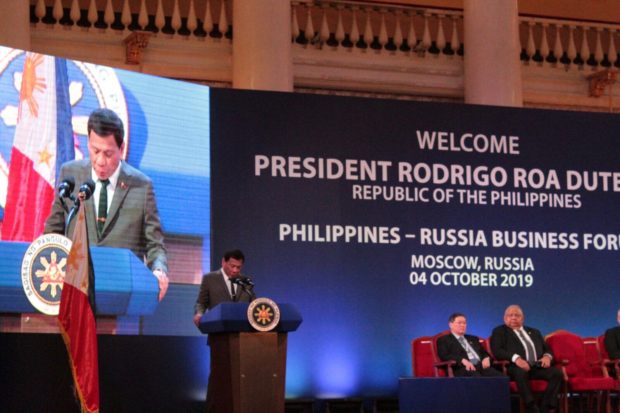 MOSCOW, Russia – With the signing of several business agreements between the Philippines and Russia, President Rodrigo Duterte invited Russian businessmen to invest more in the Philippines as he offered them protection from corruption and competitive tax incentives.

In a speech at a business forum here on Friday, the President tagged Russia as a priority trade and investment market for the Philippines.

According to him, the Philippines’ total trade with Russia last year reached a total of $1.36 billion.

“Philippine export to Russia also reached $86 million last year and increased from almost $70 million in 2017. And this year, this upward trajectory continues. This indicates promising ties between our economies at an even higher level,” he said.

The President also mentioned that economic officials from each side had earlier agreed to further maximize opportunities in trade and investments, agriculture, transport, and infrastructure.

He then urged Russian businessmen to take part in the government’s “Build, Build, Build” program, particularly in transport and railway construction.

“We invite because we feel that investors have shown a strong trust and confidence in my administration with record-breaking investments. We invite our Russian friends to invest and do more business in the Philippines,” he said.

“Let me assure you that your investments are assured of gains and protection in my country,” he added.

These would include the following:

“I say that we indeed we have made significant progress in creating a conducive environment for a robust economic engagement between our countries,” the President said.

“With strong resolve and commitment, I am confident that our economic ties will continue to prosper to its full potential. The new business agreements forged today will bring closer to us in our goal,” he added.

Before the President’s speech, Philippine officials and their counterparts signed the following agreements which covered several areas:

Cooperation on information exchange and collaboration on business development aimed at the promotion of trade and investment between the Philippines and Russia, members of Russia-ASEAN Business Council, and Philippine companies

Exchange of information on investment environment and opportunities; attract and support foreign investments in both the Philippines and Russia; encourage interested local companies in setting up or expanding their businesses; and organize business missions, workshops, other bilateral investments promotion activities

Appointment of Lifetruck International Incorporated as the exclusive sole distributor for the distribution, promotion, and sale of Sturmanskie watches in Philippines

Appointment of Lifetruck International Incorporated as the exclusive sole distributor for the distribution, promotion, and sale of Kamaz vehicles in Philippines

Promotion, distribution, and selling of IPP-NLS technologies, particularly Metatron Micro MRI Systems and its variations in the Philippines

According to Trade Secretary Ramon Lopez, the signing of the said agreements marked the “beginning of our strengthening ties with the Russian investors and tapping in to the Russian market as we look into non-traditional market for our export products.”